The question of Earth's existence in this vast universe is one that is perhaps generally held by mankind. To answer this question, extensive research is required on related topics such as the types of planetary systems that exist around stars other than the Sun, conditions necessary for planetary system formation, and origin of life.

Ever since the first extrasolar planet candidate was discovered near 51 Pegasi in 1995, research on extrasolar planets has increased like the gold rush. In Japan as well, many researchers in various disciplines have been working around the clock on the study of extrasolar planets. Number of different techniques exists for detecting these planets, one of which is the use of the radial velocity method, also known as Doppler spectroscopy, which was first implemented at Okayama Astrophysical Observatory / National Astronomical Observatory of Japan (OAO/NAOJ).

In this method, a large number of electron transition frequency rotational lines are used as high-precision wavelength standards. This technique enables high-precision radial-velocity measurement, which is impossible to achieve through conventional high-dispersion spectroscopic observation.

In actual, the precise computer modeling of the measured spectral data is absolutely essential, as is the patience of the researcher in persevering with observations and measurements. When the above conditions were met in 2003, right after the completion of the construction of the High Dispersion Echelle Spectrograph (HIDES), the first planetary candidate, the G-type giant star HD104985, was detected. In 2007, it was determined that the G-type giant star εTau, with approximately three solar masses, had a planet candidate. This discovery marked the first case for a star belonging to an open cluster and forged a path for assigning an age to the planetary system. Until January 2011, 14 potential planets and brown dwarfs have been found at Okayama. As data continues to accumulate, the detection of multi-planetary systems and planetary systems extending beyond the frost line is anticipated for the future. 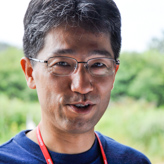